Brad embarked on a trip to see more of the world in October 2019 after the drag racing season ended, he toured Japan and then moved onto Australia, from Australia he moved on to New Zealand and then the pandemic curtailed any further travel.

Brad is in New Zealand due to the restrictions of still being unable to travel, in the summer he was working in a jet ski centre and at present is using his VW group qualifications and working for an Audi group in Queenstown.

Brad’s sister is getting married next month ( October 2020 ) and sadly is unable to travel back to th UK due to the pandemic, his travel visa is being extended and he will probably stay until spring next year before returning to the UK.

Wayne & Alison are hoping to travel to New Zealand to see him as soon as we are able to travel. 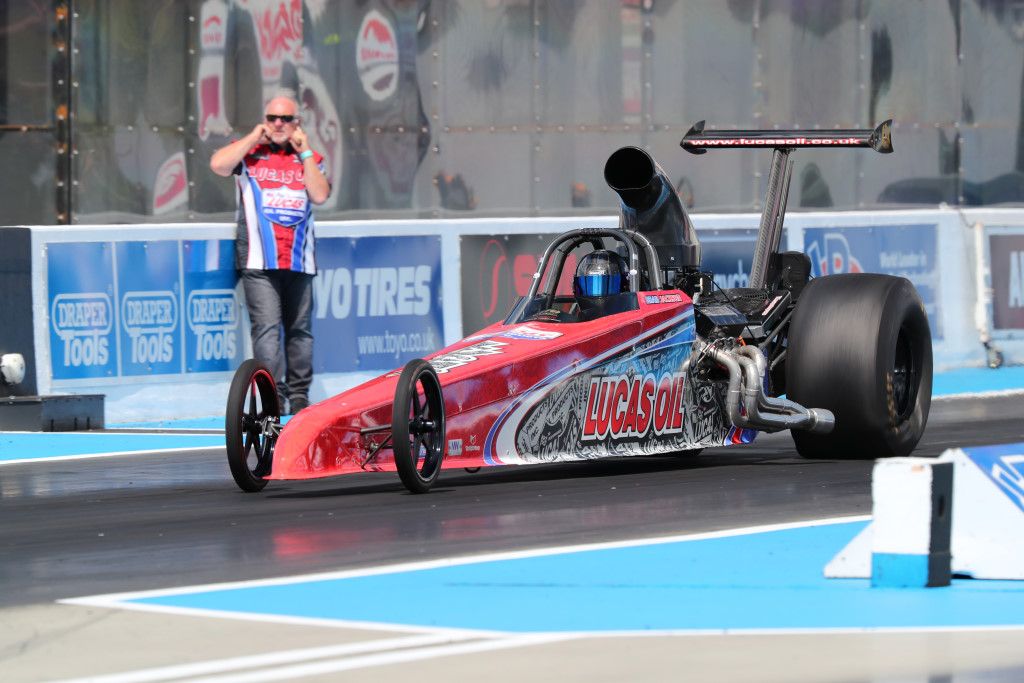 We arrived at Santa Pod late on Friday night so missed scrutineering so had to be up early Saturday morning to get the car scrutineered before the event started, we woke up to a beautiful day and Brad was looking forward to this race weekend.

With only 3 qualifying runs on Saturday  it was imperative to qualify well, qualifying one we dialled a safe 7.67 and ran 7.72, 5 hundredths of a second over dial in left Brad in 9th from 23.

Q3 we dialled a 7.64, this was a strategic dial just to improve on the 500th’s position, the plans all went wrong when Brad had a massive slide at half track and scrubbed too much speed off collecting the car, this left Brad in 16th place from 25 drivers, Brad’s worst qualifying position for a very long time, however Brad was confident that once we got into eliminations we would recover this position.

Sunday morning brought cooler temperatures and a dull cloudy sky but the weather did improve throughout the day.

Eliminations 1 Brad faced Peter Walters, Pete has had a torrid time with minor gremlins in his car but he was running well at this meeting, Pete had a slight edge on Brad off the line but Brad was closer to the dial in and Brad took the win by 0.019 of a second.

Eliminations 3 Brad was racing against Dave Evans, Dave‘s reaction time of 0.111 was too slow to an in form Brad whose 0.02 reaction time gave him the edge and Brad took the quarter final win.

Brad is having a great year, his lowest position this year has been the quarter finals so Brad has a healthy points lead in the championship, the points have to be ratified yet but Wayne makes them to be;-

Brad would like to thank Nick and Cristiann for delivering a great race car yet again, Dave Catton for his tow car driving skills and crew help

We now have a summer break until the European Finals meeting at Santa Pod in early September, we  cannot wait!

Brad wouldn’t be in this position, without the continued Support of all our sponsors  , to whom we are very grateful

On Tuesday evening we headed for Santa Pod so we could have an early start on Wednesday morning to set up our pits because we had a 3 car Nick Good Motorsport team at the event.
Wednesday we set up the pits and built the car up and took it for scrutineering, which it passed as usual, Nick and Cristiann always prepare Brad’s car to the highest standard.

Saturday brought round 1 of eliminations and we were racing Mathijs Kraetzer from the Netherlands in a very competitive altered, Mathijs had obviously seen how good Brad’s reaction times had been and got a little too eager trying to get a good reaction time and pulled a 0.04 red light foul and gifted the win to Brad

Round 3 Brad was paired against John Pryzbyl, another ex Junior Dragster driver and championship rival to Brad, John’s 0.112 reaction was no match to Brad’s 0.018 reaction and once again Brad’s great reaction time gave him the advantage and Brad took the win and was now in the semi final.

In the semi final Brad faced the seasoned campaigner Tom Atkinson who was having a good weekend, Tom pulled a 0.118 reaction time and Brad who was on fire this weekend with his super consistent reaction times pulled a 0.028 and took the hole shot win.

In the final Brad faced Mark Bailey, Mark has just moved into the class stepping up from Pro ET and was having a great weekend, Mark got a little bit too hungry and red lit, so fouled giving the victory to Brad. Brad has now won the European Finals twice in the last 3 years, he is also having a great end to the season, at the last meeting he was runner up ( Summer National) and winning this meeting shows that he is at the very top of his form, with only 1 more round to go Brad is now leading the championship.

Brad’s girlfriend, Liz, was with Brad all weekend and helped I think this helped him not to get too nervous about everything going on around him, as usual Brad was super cool with everything, the most laidback guy in our family !
The points at the top are extremely close and the National Finals meeting in October will be a real nail biter with any one of the top six in with a real chance of winning the championship!

These results are not official and need to be ratified but I make the top ten to be;-

We are eagerly awaiting the National Finals!
Many Thanks to all our sponsors and supporters

We cannot do this without you!